I have a new method of grilling chicken wings that works really well. It’s a fail proof method that starts with indirect grilling frozen chicken wings. The indirect grilling cooks the wings to about 150 degrees internal temperature. The wings are then finished over direct heat. During this finishing step the wings are brushed with a fat and then well seasoned. The first time I used this method was with my salt and pepper chicken wing recipe, which was a huge hit. I wanted to modify the salt and pepper wing recipe based on some flavors that are commonly present here in Baltimore, Maryland. Apple cider vinegar and Old Bay are commonly used for steaming shrimp around this part of the country. I decided to mix apple cider vinegar with some melted butter and use this for brushing the wings. Then I added some Old Bay seasoning! These were good. Check this out recipe for Grilled Old Bay Wings!

According to the Old Bay website, this magical spice mix can be found all around the country in most grocery stores. If you can’t find Old Bay, look for a “shrimp boil” seasoning. Around Maryland Old Bay is used for everything. Most commonly it is used for crabs and shrimp but it is also used on popcorn, French fries and chicken wings.

Start with a medium high heat. Line up your chicken wings on the indirect side of the grill (away from the direct heat charcoal). Close the dome. After about 10-20 minutes the wings should be “almost” cooked. At this time, take equal parts melted butter and apple cider vinegar and mix. For about 10 wings melt 2 tablespoons of butter and mix with 2 tablespoons of vinegar. Mix well. If the butter/vinegar mix starts to harden, microwave it a little bit.

Use tongs and move the chicken wings over the direct heat. Dip a brush into the butter vinegar mix and lightly brush all of the wings.

These wings were absolutely incredible. Brushing wings with butter is always a good idea. When the butter is mixed with apple cider vinegar you get that extra vinegar zip along with the fat of the butter. Then add in the complex flavors of Old Bay and it’s a real treat! This was awesome and will be on the menu very soon at one of my tailgates!  These Grilled Old Bay Wings are amazing! 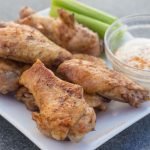