I was laying in bed one night, unable to sleep, thinking about things to grill when it hit me. I have never grilled a panini on the charcoal grill before. My grocery store sells some incredible ciabatta rolls so I picked one up, grilled some chicken and went for it. Here’s what happened for my grilled chicken bacon ranch panini:

My grocery store had some split chicken breasts (with skin and bone) on sale for really cheap so I picked up a pack of four. I prepared a medium high heat and tossed the chicken right over direct heat. After significantly browning both sides of the chicken I butterflied them and then laid them on the grill split side down to get them cooked all the way through.

The above picture shows the butterflied split chickens, some grilled fries and a red pepper.
When the internal temperature was over 165F I took the chicken off, let it rest for a few minutes, and then diced it up.

Once the chicken breast was diced, the fries were cooked, and the red pepper was roasted, I diced up the roasted red pepper, sliced the ciabatta bread and brought all the ingredients back to the grill for panini assembly.

I brushed both sides of the ciabatta bread with olive oil and tossed them over medium/medium low heat (this was the leftover heat from the chicken and fries). I added a few extra coals just to keep things going a bit longer. I assembled the panini over direct heat starting with chicken, cheese, bacon, red pepper or tomato, ranch dressing and then the top of the bread.

Once the panini is assembled you can use a spatula to press it down a bit or a panini press. Luckily I happened to have a panini press laying around so I used it.

I took the paninis inside and cut them with a sharp knife. Really nice. The ciabatta bread was so crispy with a great flavor. The ranch, as usual, complimented the chicken and bacon really well and on mine I had just tomato which tasted great. My wife had roasted red pepper which she said really had a nice grilled flavor to add to the panini. We will be doing this again for sure!!! 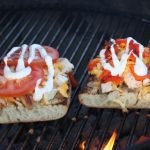