Growing up in Maryland I only know of one way to eat shrimp and that involves a pot of boiling vinegar and Old Bay seasoning. It’s fantastic. The Old Bay flavor is something spicy and unique and this is what makes steamed shrimp such an amazing side dish around here. For those of you not familiar, Old Bay is a mix of spices that includes mustard, paprika, bay leaf, celery seed, black and red pepper, cinnamon, cloves, allspice, nutmeg, cardamom, ginger, mace and salt. That’s quite a list!

I’ve pondered for a while a way to get this same vinegar/Old Bay flavor on the grill. The obvious thing would be to just sprinkle some Old Bay on shrimp and grill it. But that’s just not good enough. Check out this method for grilling “MD style” shrimp.

The normal way that I know how to eat shrimp is to boil them in vinegar with Old Bay. Since I wanted to grill my shrimp this time I chose to treat the vinegar old bay solution as a marinade or brine and then season the shrimp and transfer to the grill. Add 1 cup of vinegar to a bowl and mix in 2 T of Old Bay seasoning. Mix well and add in the shrimp (with the shell still on). Add a few ice cubes and let this sit for about 10-20 minutes while you get your grill ready.

Put the shrimp over the coals and close the dome. After about 5 minutes and one flip, the shrimp should look like this (below).

This was a real winner. The steak was perfect and the Maryland style grilled shrimp was such a nice addition to the meal. I’m going to start grilling shrimp much more often after figuring out this recipe for grilling “MD style steamed” shrimp with Old Bay! Awesome!

Note: If Old Bay isn’t sold in your area of the world you may want to consider googling for “Old Bay Seasoning Recipes” or you could use any spicy creole style seasoning. It won’t be the same but it probably would be quite tasty! 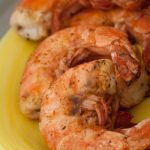