I love working with small businesses to test out their products, especially when it’s BBQ related. When I was hanging out with fellow grilling bloggers and BBQ pros at the Kingsford Invitational I overheard a lot of talk about automatic smoker temperature regulators. I wasn’t too familiar with these and after chatting with the creator of the Pitmaster IQ I decided I’d like to test it out. Basically, the Pitmaster IQ 110 is a computer controlled fan which totally controls air intake to a smoker. There is a temperature probe which attaches to the cooking grate to measure smoker temperature. This probe reports temperature data back to the fan computer. When the temperature drops below your set point the fan turns on and blows air into the fire. When the temperature goes higher than your set temperature the fan shuts off and lets the fire go down a bit. This is pretty brilliant if you ask me.

I wanted to test this temperature controller with a new brisket recipe/method I was told about. At the Kingsford Invitational I also met Doug from the BBQ team Smokers Purgatory. I asked him what he thinks is the easiest way for a home BBQ’er to prepare an easy “same day” brisket. I specifically mentioned that I’d like to have this brisket ready for a 4pm football game without waking up at 2AM to light the smoker. He told me that although he only uses packer briskets for competition, when he is home and his buddies want some brisket for a game he does it this way. I figured it’s worth a try. Here’s what he said:

Here’s what I did:

I am using the Pitmaster IQ on my 18.5 inch Weber Smokey Mountain smoker. The IQ adds air to the fire via a flexible hose that connects to the air intake of the smoker.

The Pitmaster IQ unit is securely attached to the air intake via a spring loaded wing nut that easily screws into place. The general plan is to have all air intake vents closed with the exception of the one vent that the fan unit is connected to. The air exhaust at the dome of the smoker is always wide open.

From my first few test runs with the Pitmaster IQ, for this Pitmaster IQ Smoker Fan Review, I knew that it worked well. My first test runs only lasted about 4 hours and it held temperature amazingly. Normally when I use my Weber Smokey Mountain in order to maintain steady temperature, especially in the winter, I am constantly adding more coals, opening the door to let the fire burn hotter, or closing a vent. It’s a very hands on experience and I’ve gotten quite good at it. Normally I’m fine with this constant “tinkering.” However, the time restraints of family life and children tend to make this not always an adequate method of smoking. Thus, I was looking for a way to “set it and forget it” and that’s exactly what the Pitmaster IQ is all about. The goal today was to fill the WSM with unlit charcoal and some smoke wood, add about ½ of a charcoal chimney with fully lit charcoal and let it roll all day with minimal work. The only work I was going to do was to add a beer bath to the brisket when it reached 140 degrees and then forget about it.

For this recipe you can use any brisket rub you want. In fact, any BBQ rub will work just great. If you want a good suggestion check out this BBQ brisket dry rub.

Doug suggested using a brisket marinade. I didn’t have any brisket marinade recipes ready to go so I figured I’d modify things a bit and make a beer bath. Keeping in line with my obsession with local brewed craft beer I turned to a Heavy Seas Winter Storm which is a really hoppy bitter beer. I love it. I mixed it 50:50 with some beef broth and that was it. Easy.

The brisket went on the smoker with a temperature probe deep in the thickest part. I focused on having a lot of smoke wood in the smoker for the initial few hours. This brisket will be foiled for most of the cook, so I reasoned that early on is the time to get all that smoke flavor in. Rather quickly the internal temperature reached 140 and I poured in the beer bath and covered it with foil. The above picture was taken when at an internal brisket temperature of 140 degrees before the beer was added.

Wow! This sure is a different method for preparing brisket. To be honest I was highly skeptical and afraid that this would be nothing better than pot roast.

I took the foiled brisket off at the 7.5 hour mark. Why? Well at this point the WSM and Pitmaster IQ could no longer hold temperature. It was so cold out that the full charcoal basket was pretty much all used up! The IQ fan was just running and running but it couldn’t get the fire going any more since there were minimal coals left. At this point I moved the brisket to the oven and cooked it to about 205 degrees. It was finished in another 30 min or so. I was aiming for anywhere between 203-210 degrees.

After letting it rest I sliced the brisket flat. It was really good brisket and it had that tender fall apart BBQ brisket characteristic. It was also nicely sliceable and not “pot-roasty.” The foiling process, however, didn’t allow any bark to form. So that’s a bad thing. However, the steaming/braising effect of the beer broth allowed this brisket to be quite tender in only about 8 hours. This is a pretty handy trick if you want to cook a brisket in a reasonable amount of time. Now is this a competition worthy brisket? No way. This is more of an “emergency brisket” recipe/method to get that brisket out by dinner time. Doug offered another piece of advice to get the bark to form a bit more. When the brisket is almost done (maybe about an hour left) open up the foil and let the smoke hit the brisket again. I didn’t follow this step. Maybe next time.

The Pitmaster IQ fan, in my opinion, performed A+. If I didn’t have this fan going on this cold windy winter day I know for a fact I would have been adding coal, stoking fire, opening the door all day long. I pretty much did nothing to this smoker (other than foiling the brisket and adding the beer) until the 7.5 hour mark. Holding temperature in the cold for 7.5 hours without doing any work was a total success in my opinion. I can only imagine how long I can hold temperature in the spring. I look forward to using this temperature controller in the future! 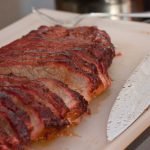 Disclaimer: I was sent a free Pitmaster IQ fan to test out.