June 5, 2020
This post may contain Amazon or other affiliate links. As an Amazon associate, I earn from qualifying purchases.

Though pork loin and tenderloin are both lean cuts from the back of the pig they're actually completely different cuts. The pork loin is a larger wide roast that normally has a fat cap running along the top. Pork loin can be cut into thick chops or roasted whole. Pork tenderloin is a much smaller cut of meat that is very lean and best for searing over high heat. Both are great options, but for this recipe the tenderloin works best because of its size and tenderness.

How to make a Bacon Lattice

If you have never made a bacon lattice it may seem a bit daunting but it’s actually pretty easy. Especially after you have made a few and get the pattern down. I prefer to use thinner sliced bacon to achieve a crispy exterior. Thick cut bacon looks great when it’s raw but takes forever to cook. You end up ruining the dish trying to get the bacon to crisp.

Lay out the strips of bacon to the width of whatever I tend to wrap. Then add a slice or two to each side so I can fold in the edges after it’s rolled up. Be sure to prepare the lattice on a sheet of parchment paper or aluminum foil to make it easier to roll.

Once you have the width simply fold back every other slice and place a vertical slice over then fold the bacon slices back. Next repeat the process with the opposite slices of bacon until you have created a weave pattern. Make sure that you have even spacing and that the bacon is not torn, especially the slices in the middle that will hold the weight of your structure.

Preparing the filling for the green Chile Fatty.

This is by far the easiest step of the recipe. Just throw everything into a mixing bowl, crack a few eggs and mix just enough to combine. I used Pork King Good Breadcrumbs instead of traditional breadcrumbs for a few reasons. First because when has an extra layer of pork been a bad thing in a recipe. Secondly, this will significantly reduce the carbs in the total recipe. If you don’t have the Pork King Good Breadcrumbs you can either crush up some traditional pork rinds or substitute Panko breadcrumbs.

Rolling up the Fatty

I hope you giggled reading that as much as I did writing it. Now that the bacon Lattice is prepared, you've spread out the filling and places the seasoned pork tenderloin in the middle it’s time to get rolling. Starting at one end grab the parchment paper and fold it all the way over the tenderloin. Next tuck in the bacon and gently sharp the fatty before rolling it the rest of the way forming an evenly shaped cylinder. Finally fold in the sides and tightly wrap in plastic wrap before placing in the fridge to tighten up. You can do all of these steps the night before but I recommend chilling the fatty for at least 30 minutes.

Whenever I’m smoking fatty, pork shoulder, meatloaf or anything that may be delicate to remove from the smoker I use a mesh grilling mat. These mats are a lifesaver to prevent disaster when pulling the meat off the pit. Smoke the fatty at 250 degrees F for 2 hours with a probe inserted into the center of the tenderloin. That way you can monitor the internal temperature throughout the cook. Once the tenderloin has reached between 110-120 degrees F. Internally it’s time to crack up the heat and begin to crisp the bacon.

Crisping the Bacon on the Fatty

Once the fatty has reached 155 degrees F internally it is done cooking. Depending on what the bacon looks like you have some decisions to make. If you’re happy with the doneness of the bacon go ahead and sauce it up and smoke for a final 15 minutes. However, If you’re not happy with the bacon you can either continue cooking which will affect the juiciness of the pork tenderloin or use a sear-all to cheat a bit and give the bacon a final crisp. If you do need to cook the fatty longer to crisp the bacon the good news is the pork tenderloin is literally encased in sausage and bacon. It can handle a few extra minutes  without drying out too much. 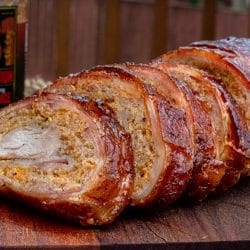