This recipe for Cast Iron Smoked Baked Beans is the best bbq beans recipe you will ever have. Loaded with sausage and sautéed onions, peppers and smoky goodness.

Growing up this smoked baked beans dish was my mother’s go to recipe for any family gathering or backyard cookouts. The original recipe was made in a crockpot and didn’t have any sautéed onions or peppers.

I decided I wanted to take this childhood recipe and give it a facelift. Sauteing the onions and peppers in a cast iron skillet along with the ground sausage adds texture and depth of flavor to the recipe.

I personally added a few diced jalapeños to kick the spice up another notch.

Why Smoking Baked Beans makes such a difference.

As I mentioned my mother originally prepared this recipe in a classic 1970’s beige and brown crockpot.

The beans were always delicious but I knew that a kiss of smoke would lend itself perfectly to the dish. As you cook the baked beans in the smoker the top of the beans will begin to develop a skin on it.

Stirring the bbq beans every half hour incorporates that smoke into the sauce so that the entire skillet has that smoky flavor not just the top.

I don’t have a smoker, can I still make This Baked Bean Recipe

Of course, this recipe is still very tasty whether you prepare it in a crockpot or baked in the oven. You could also just simmer the baked beans on the stove top on low for about 30 minutes and serve.

If preparing in one of these methods you might want to add a tsp of liquid smoke to replicate that smoky flavor.

You can also prepare the recipe over indirect heat on your outdoor grill to get that subtle charcoal grilled flavor.

All About the Beans.

If you don’t have every variety that I used don’t fret go ahead and substitute whatever beans you have.

Even if you only have two types of beans just use the same quantity and the recipe will come out great.

The reason I use canned beans as opposed to fresh is primarily out of convenience. In a recipe like this I find that it’s just easier to pop open some cans and get cooking right away.

If I did use dry beans I would have to soak them overnight. For soups I normally use dry beans but for this recipe I find the canned is the way to go. 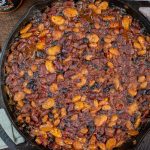