August 15, 2010
This post may contain Amazon or other affiliate links. As an Amazon associate, I earn from qualifying purchases.
Jump to Recipe

So what's the difference between roast beef and pit beef?

This is a great question and I think the answer is: they are the same. However, Pit Beef is usually found on the East Coast around the Baltimore, Maryland region. You'll see tents set up at fairgrounds offering fantastic pit beef sandwiches which are made from a big chunk of beef cooked over a wood burning fire, or "pit." Hardwoods are not added to the fire so there is no BBQ style smoke flavor here.

I normally make rotisserie roast beef on my Weber rotisserie attachment but I wanted to try cooking a Costco eye round over direct heat to char it a bit and then cook the rest via indirect to bring the beef up to temperature. My goal was to make Grilled Maryland Pit Beef sandwiches on my charcoal grill.

Here's what I did:
I made a quick dry rub by combining equal parts garlic powder, black pepper, salt and a dash of chili powder and rubbed it all over the eye round. I trimmed the fat off of the eye round before I placed the rub on.

My eye round was almost circular but it seemed that there were three sides to it. So for direct grilling purposes I grilled each "flat side" for 3 minutes over high heat until the beef was nicely seared and then moved it over indirect heat until it was cooked.

After the searing I was surprised that the internal temperature was only 59 degrees.

After about 40 minutes of indirect heat the eye round had an internal temperature of 135 which is right were I wanted it today. This will yield a juicy medium rare after a couple minutes of resting.

Wow! Look at the juices coming out after the 15 min rest.

After the 15-60 minute rest I got out my electric knife to cut the eye round as thinly as possible. When you are using an electric knife to cut roast beef you almost want to chip the meat, to avoid slices that are too thick. If you see the photo above the slices are pretty thick. After taking the photo I really focused on thin slices. I'm not saying the thick slices weren't any good; they were great! However, there is something magical about really thin sliced pit beef, which either requires a meat slicer or great precision with an electric knife.

I think it is a Baltimore thing but I love raw onions and horseradish on my sandwich. Really nice! The next best thing to a Chaps Pit Beef Sandwich! 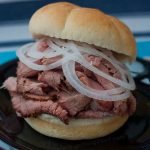