This Imperial Stout BBQ sauce recipe is loaded with deep rich flavors lending itself perfectly to pork, beef or as well as Irish favorites

The only problem with this sauce is that it uses quite a bit of whiskey, which is costly. I wanted to come up with a sauce that uses just a bottle of beer, as this would be much cheaper than using a few cups of whiskey.

I found a few BBQ sauce recipes online that use stout beers, but they are way too heavy on the soy sauce. I’m not a fan of tasting soy sauce in my BBQ sauce.

The recipe that I came up with is a mild stout beer BBQ sauce that is simple to make. It only has 6 ingredients.

This naturally results in a stout that is intensely flavored compared to the regular stout. To see what I mean try drinking a Guinness and then drink an imperial stout.

You’ll notice quite a difference! Using an imperial stout works out perfectly for the purposes of making a BBQ sauce, as you don’t have to add too much else to the mix to get a nice sauce.

You’ll be rewarded with a smooth BBQ sauce. Bring the mixture to a boil and then reduce the heat and simmer for about 20-30 minutes. Stir often as it can bubble and burn.

Notice the rich color of this sauce. It is a simple BBQ sauce that has a mild flavor. Normally tomato based BBQ sauces turn me off a bit because they can overpower the food.

I like my flavors to come from the dry rub, the meat, and an appropriate amount of time on a smoker.

This sauce works perfectly for me as it allows the taste of the smokey meat to shine through, even though a heavily flavored imperial stout is used.

For this write up I decided to smoke kielbasa. I haven’t written up a smoked kielbasa recipe yet, but I absolutely love it.

It only takes about an hour on the smoker and it results in smokey, juicy sausage that I like to cut into small sections and douse in BBQ sauce.

More Recipes You Will Love 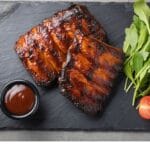