Looking for a delicious BBQ sauce? I’ve been making this Sweet Whiskey BBQ Sauce for a few years now. It’s a sweet BBQ sauce with a nice whiskey kick. If you are a fan of a certain whiskey, the flavor of that whiskey will shine through in this whiskey BBQ sauce recipe. I think that’s pretty cool.

There is no order to the addition of the ingredients. Just mix them all in a medium sized saucepan. Bring the mixture to a boil while constantly stirring.

Be very careful here as it can bubble, pop and burn to the pan. So stir often.

You’ll see the dry onion flakes floating around in the sauce, but don’t worry. You will strain this out during the last step. The reason for using these dry onion flakes is to avoid the need to finely shred an onion.

Shredding an onion with a cheese grater, in my opinion, is one of the most painful chores I can think of. So, I substituted dry onion flakes followed by straining. The onion flavor is still there with none of the fuss.

After the sauce has come to a boil reduce the heat to a brisk simmer for about 20 min. Keep stirring the sauce often.

If your sauce looks a little runny don’t worry it will thicken as it sits. I recommend making this sauce at least a couple of hours before you want to use it. It will taste the best if you make it a day before.

After the sauce has cooled, strain it into a container, leaving the onion flakes behind.

Do you love the taste of barbecue sauce and all it goes with? If so, then this is a recipe for you. There are many recipes out there, but few like this one that really allow you to experiment.

Don’t be afraid to experiment and take this sauce in whatever direction you desire. There’s no right or wrong way to make this so enjoy the ride and let your taste buds be your guide along the way.

What are some common ingredients for making BBQ sauce?

The main ingredients for making this barbecue sauce typically include whiskey, brown sugar, ketchup or tomato paste, garlic, and a selection of spices such as salt, pepper, chili powder, or cayenne pepper.

How should I store my leftover barbecue sauce?

To store leftover barbecue sauce, you will want to transfer it to an airtight container or jar and keep it in the refrigerator. It should be good for up to one week when stored this way.

Can I make any substitutions if I don’t have all of the ingredients on hand?

You can often make substitutions if you don’t have all of the ingredients on hand. For example, if you don’t have ketchup or tomato paste, you can use a different type of sauce like barbecue sauce or even salsa in its place. You can also experiment with using different types and quantities of whisky to create your own unique flavor profile. Just be sure to taste the sauce as you go and adjust any ingredients as needed until you achieve your desired flavor.

Note: This Sweet Whiskey BBQ Sauce Recipe was originally written in 2011. I have kept the recipe the same but totally overhauled a few of the above photos. 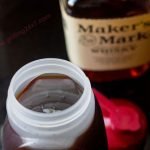 A sweet whiskey BBQ sauce recipe. Don’t worry, the alcohol will boil out and this sauce is safe for everyone.
Prep Time 15 minutes
Cook Time 30 minutes
Servings 3 cups BBQ sauce