Stuffed Flounder with Crab Imperial is a perfect date night recipe or a perfect seafood dish for the family. Creamy Crab Imperial with tender flaky flounder is a match made in seafood heaven.

Top that off with some spicy sriracha remoulade and you’ve got a restaurant quality meal without leaving the house.

Flounder is a mild white fish that has a light flaky texture. When people tell me they don’t like fish because it’s too “fishy” Flounder is the fish I tell them to try.

It’s honestly a bland fish which is not necessarily a bad thing. It takes on flavors very well in the form of spices and sauces without getting lost in the dish. Flounder is very low in fat, calories and is a great source of protein.

How Long do You Cook Flounder?

According to the USDA food safety guidelines Flounder and most other white fish should be cooked to 145 Degrees Fahrenheit.

What’s the Difference Between Crab Cakes and Crab Imperial?

In short, Not much. Both are formed with a mixture of Mayonnaise, Eggs and seasoning. Crab imperial is normally served in a baking dish or a scallop shell and normally doesn’t have any breadcrumbs to act as a binder.

Because I’m using crab imperial as a stuffing I choose to add a small amount of Panko Breadcrumbs. This helps the crab imperial hold its shape but if you are making it on its own you wont need the breadcrumbs. Crab Imperial is traditionally creamier than a crab cake. Often additional imperial sauce is spooned over the crab and baked to form a light crust on top.

Since you’re wrapping the flounder around the crab imperial instead of butterflying the fish it’s important to make sure the thickness of the flounder is the same throughout the whole filet.

If one end is thicker make a small cut in the filet to fan it out so that the flounder cooks evenly.

Crab imperial can be prepared ahead of time or even the night before. Letting the mixture chill in the refrigerator allows the imperial to set up and the flavors to meld together.

Depending on the type of crab meat you use you may have more imperial sauce then you need. Gently add the sauce to the crabmeat and breadcrumbs folding just until the crab meat is coated.

This is a tough question to answer because I use a blend of crab meats in my imperial as well as my Crab Cakes.

Jumbo Lump is obviously your highest quality crab meat but It lacks the sweetness of the claw meat. I prefer to combine the claw with the jumbo lump for flavor as well as texture.

I know that that’s not always an option and that’s where using Special or Backfin crab meat is a good option for you.

Special is crab meat from the body of the crab whereas Backin contains special as well as broken pieces of lump crab meat.

Backfin and Special are also much cheaper than jumbo lump crab meat so at the end of the day you have many options on what type of crab meat you can use.

Well that’s tricky. The easy answer is Fresh of course but it’s not always available and It can be a lot more expensive. If I’m making crab cakes or crab imperial I have no issue using pasteurized crab meat but If i’m serving the crab meat on its own or say in a butter sauce over steak I really try to use fresh whenever possible.

It sure can be! The only ingredient you’ll need to substitute is the panko breadcrumbs. You can either use ¼ cup of Pork King good Breadcrumbs. Or 2 tbsp of almond flour and your good to go. If you’re just making the crab imperial without the flounder then just skip the breadcrumbs altogether. Also checkout My Seafood Imperial Recipe from culinarylion.com

This is just a classic Remoulade sauce that I thought needed a fiery Kick. Remoulade is classic French Mayonnaise based sauce containing pickles, capers, shallot, herbs and dijon. There are many variations of this sauce but it’s outstanding on anything seafood. American versions tend to contain ketchup or tomato paste giving it a pinkish color. Tartar Sauce is basically a simplified version of remoulade and can be substituted interchangeably. 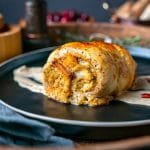 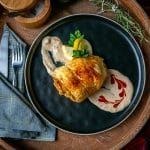