These Grilled pork chops topped with caramelized apples are the perfect quick and easy dinner any night of the week.

Pork chops are an economical yet tasty meal that you can have grilled and on the dinner table in no time!

Last month I was cleaning out my Weber Performer Kettle Grill, I hadn’t used it in a while and it was a disaster when I took the cover off and saw that the grill grated were rusty and falling apart.

I’ve had this particular kettle grill for years and I decided it was time to upgrade the hardware. I had seen the Weber Gourmet Bbq grilling system and figured this was a perfect excuse to try it out.

The basic grate has the flip up sides to add wood or charcoal while cooking and it also has a removable center grate that you can replace with different inserts like a Cast Iron Grate (pictured) or a Cast Iron Griddle..that’s going to be my next purchase!!

The cast iron grate is perfect for searing meats and getting thick grill marks on your steaks or chops.

I also received the the Weber Kettle Vortex Cone as a Christmas gift so you know I had to try that out as well.

Basically it turns the center of your grill into a jet after burner. I’ve got the Weber kettle with the propane lighter so all you need to do is fill the cone with charcoal and light it up.

Within 10 minutes I was well over 500 degrees and ready to sear.

After all the setting up and scrubbing the kettle I just wanted to grill something and it just so happened that I had just bought some beautiful center cut porterhouse pork chops.

These are by far my favorite because you get that both the loin chop and the tenderloin all in one.

The best way to Grill these is definitely hot and fast. Simply season with whatever bbq rub you like. I just so happened to have some Caribeque Hot Honey Heat that was perfect for these chops.

I find that the meat cooks faster and more evenly.

Since the grill was hot and I had a few minutes before the chops were ready I decided to put together a quick topper for the chops.

Keeping it simple I just chopped up an apple and a yellow onion, added about 4 tbsp of good Irish butter and sprinkled a little extra rub on top. I set the cast iron directly over the vortex flame to caramelize the apples before grilling off the pork chops.

Once the apples were caramelized I moved it off to the outer ring of the grill to keep warm while I seared the pork chops.

Just as the chops were finishing up at a perfect 145 degrees F. I brushed the chops with some bbq sauce and moved them to the outer ring to let the sauce set up.

After I took the chops off the grill and topped them with the caramelized apples it was time to eat. The chops were juicy and as tender as can be.

The combination of the bbq sauce and apples were the perfect compliment to the meaty chops. Definitely a dinner I would prepare again.

It’s quick, tasty and easy on the wallet, what more could you ask for.

More Recipes You Will Love 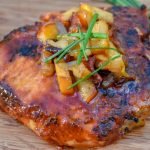