April 21, 2021
This post may contain Amazon or other affiliate links. As an Amazon associate, I earn from qualifying purchases.
Jump to Recipe

New Orleans BBQ Shrimp is a recipe that is loaded with the flavors of the French Quarter.

I know what you’re thinking, have those lovely people in the big easy had one too many cocktails on bourbon street.

How in the world can you call something barbecue that’s not smoked or grilled, doesn’t have anything even slightly resembling bbq sauce and is served in a skillet full of butter.

As the story goes barbecue shrimp first arrived in Uptown New Orleans at a restaurant called Pascal’s Manale in the 1950’s.

A customer had just returned from Chicago on business where he had a dish loaded with shrimp, butter and pepper.

The chef at Pascals attempted to recreate the dish and apparently exceeded the expectations creating an even tastier recipe.

Soon after other chefs around town began creating their own renditions of this now iconic Nola Dish.

Today you will find the BBQ shrimp served all over town each with a rich buttery sauce and beautiful gulf shrimp.

Worcestershire and creole or Cajun seasoning is commonly used to add flavor to the butter with white wine or beer rounding out the sauce.

See What Else Is Cooking

I’ve traveled to New Orleans many times and my aunt even grew up just outside the city in Slidell. It’s a fantastic food scene with amazing bars and restaurants on every corner.

As a Maryland native I have a fondness for all things seafood so barbecue shrimp is a dish right up my alley.

When researching this recipe I figured why not start with one of the most well known recipes from the iconic Commander's Palace.

I used beer, worcestershire and the best Cajun spice on the market Chef Paul's Redfish Magic.

What kind of Shrimp to Buy for BBQ Shrimp

For New Orleans BBQ Shrimp I think bigger is better. I recommend using at least a 16/20 ct. size shrimp but for my recipe I used even larger.

10/15 ct. If you're unfamiliar with how shrimp are sized and sold it’s the amount of shrimp it takes to make up one pound. For example 10/15 count shrimp will contain between 10 to 15 shrimp per pound.

Wild Caught Gulf Shrimp are the gold standard when it comes to a high quality shrimp. Most shrimp are frozen immediately after being caught so don’t be discouraged from buying frozen shrimp.

I find that fresh shrimp are often a few days old and already have an off smell needing to be cooked immediately. frozen shrimp can be thawed quickly by running the shrimp under cold water.

When possible buy shrimp that have the shell still on. This will protect them during the cooking process. 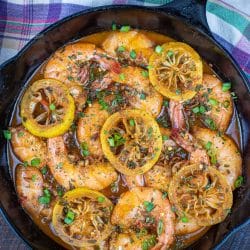 Serving size may vary. 1/4 of recipe per serving