June 18, 2020
This post may contain Amazon or other affiliate links. As an Amazon associate, I earn from qualifying purchases.

A light tropical take on traditional potato salad. This Hawaiian Potato Salad is sweet, spicy and full of island flavor. Roasted Potatoes, fried spam and a sweet Thai chili vinaigrette. What more could you want!

How to Roast Potatoes for Hawaiian Potato Salad.

Spam was created by Hormel meats in 1937. The name came to be as guests at a dinner party hosted by Jay Hormel were offered a free drink if they wrote down a name for their new canned meat product. One of the guests blurted out SPAM and the name stuck. During the Second World War Hormel Shipped tens of millions of cans of spam to soldiers fighting abroad. Even Russian soldiers remarked of having to live off spam when supply chains were cut off. Hormel received high praise for their contributions to the war effort.

After the war restrictions were placed on Hawaii’s deep sea fishing industry which was worked by a high number of Asian Americans. In addition Spam is credited with saving much of the population from starvation due to the fishing restrictions and other food shortages. Even today Hawaiians eat over 7 million cans of spam a year. They are only second to Guam for the highest consumption per capita. There are 15 varieties of spam sold in over 44 different countries.

A Monty Python sketch involving Vikings singing spam, spam, spam in loud crescendos actually gave birth to the phrase we now associate with unwanted emails. Spam even came out with a limited edition can to celebrate the Broadway debut of the Monty Python musical “Spamalot”

Thai Chili Sauce is one of my absolute favorite ingredients. On its own it is a fantastic dipping sauce or marinade but can also be the base for a delicious vinaigrette. Adding fresh pineapple, soy and sriracha adds a wonderful depth of flavor that can be brought together in the blender with a drizzle of avocado oil. 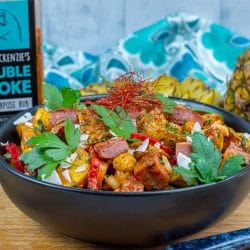