Turn your leftover pulled pork into a delicious low carb Cuban Casserole. This healthy dinner is ready in no time using the leftovers out of your fridge.

All of the flavors of the classic pressed sandwich reimagined in a one skillet recipe that the whole family will love.

Every time I smoke a Pork shoulder I’m thinking about what to do with the leftovers. Cuban sandwiches are one of my all time favorites but I didn’t have any rolls at the time.

Instead I just loaded all the ingredients into a cast iron skillet and made this delicious Cuban Casserole.

I was in heaven with the combination of smoky pork, pickles, ham and Swiss simmered in a Dijon cream sauce.

You won’t even miss the roll and for me it’s all about the toppings anyway.

A perfect combination of flavor and texture.

Cuban sandwiches are traditionally made with sliced Pork loin but using leftover pulled pork is a fantastic substitute.

You get the added smoky fatty pork that is tender and melts in your mouth. Even if your Pork was a little dry the Dijon cream will bring it back to life.

The richness of the pork is balanced by the crunchy tangy pickles perfectly. Then to take it over the top the salty ham and nutty Swiss round out this simple one pan recipe.

You Won’t Miss The Bread With this Cuban Casserole

If you do want to make a sandwich I still recommend reheating the pulled pork in the Dijon cream.

You can then top with ham and Swiss and press the sandwich on the grill. Either way the combination of ingredients are a perfect blend of flavors.

Traditional Cuban sandwiches are either pressed using a brick wrapped in foil or grilled on a panini press. The roll tends to be a softer hoagie roll rather than a crusty baguette.

A brief History of the Cuban Sandwich

From what I’ve read via Wikipedia the Cuban sandwich originated in Key West and Miami in the late 1800s.

It was a quick and easy sandwich created by the cigar factory workers with ingredients they had available. Later the sandwiches popularity grew up the Florida coast to Tampa.

The high population of Italian immigrants started substituting salami instead of ham. I will definitely have to give that a try next time.

I’m always a fan of cast iron cooking because of how well it conducts heat. You can use a Classic cast iron skillet or an enameled cast iron pan.

Either one will work fine and if you’re in a pinch you can even put this together in a rectangular casserole dish. As long as you can get the ingredients in the oven or set on your pit you’ll have a tasty meal in no time. 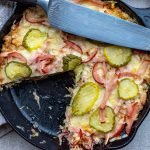 Portion size will vary. I recommend about a 6-8oz portion per serving.