Smoked Brisket Subs
A great use of BBQ leftovers!

When you smoke brisket you end up with a lot of leftovers. Mrs. Grilling24x7 and I were pondering what to do with all of it.

Of course we could just heat it up and serve it with some baked beans as a nice side dish.

But that's bit boring. Here's a good idea for you if you are looking to use up all those BBQ brisket leftovers.

I had the brisket in a ziptop bag in the freezer so the first thing I did was thaw it out.

The night before I put in the refrigerator. I preheated the oven for 350 degrees and generously poured BBQ sauce all over the brisket.

I wrapped the brisket in foil so it would steam a little bit in the oven. Don't leave it open to the oven heat or it might dry out a bit.

Oh look at all that brisket! I heated the brisket for about 30-40 minutes until it was really warm.

Just keep touching it and when you think it's hot enough layer it on some sub rolls and sprinkle some cheese on top.

Put the Leftover Smoked BBQ Brisket Subs back in the oven to melt the cheese. Easy as that. Really tasty too! 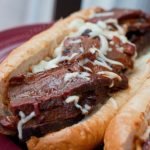